The Manchester Reform Synagogue was founded in 1857 when Manchester?s Orthodox synagogue, Halliwell Street, split into two congregations: the Orthodox Great Synagogue and Manchester Congregation of British Jews. Their original building was in Park Place (see photo below) at the near end of Cheetham Hill Road, then a busy Jewish neighbourhood. The building was consecrated on 25th March 1858 and associated itself from the outset with the West London Synagogue, which had been founded in 1841. Following their example the original name was adopted, the reference to ?British Jews? being inclusive of both Ashkenazi and Sephardi. 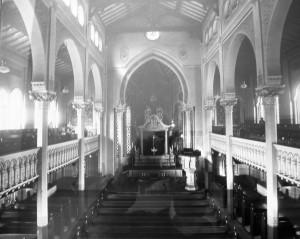 A prime mover was Tobias Theodores, one of Owens College?s first Professors on its foundation in 1851 (Gravestone at Old Whitefield Cemetery below). Our second minister from 1860 – 1873, Rev. Dr. Gustav Gottheil, was also a lecturer at Owens College. The nineteenth century saw two further ministers, Rev Dr Isaac Weiner (1873 – 1877) and Rev Laurence Mark Simmons (1877 – 1900). The President at the turn of the century was Charles Dreyfus, a prominent industrialist, local politician and Zionist leader.

On the 1st June 1941 during the blitz of Manchester the synagogue was bombed and lost its building as well as most of its records and treasured possessions. However, thanks in large measure to the dynamic leadership of Rabbi Percy Goldberg, there was not even a break in services, which a few weeks after the bombing were holding Sabbath services again in the Cheetham Assembly Rooms, then the Houldsworth Hall in Deansgate and in 1948, a prefabricated building on the Park Place site. In 1949, compensation from the War Damage Commission, negotiated through Frederick Lister, allowed the congregation to purchase the present site and build a Shule in Jackson?s Row, with additional assistance from Alexander Levy and funds from the Lionel Blundell building appeal. The building was designed by Eric Levy and Peter Cummings. On 18th May 1952 the site was consecrated and was opened on 29th November 1953 in presence of the Lord Mayor of Manchester and the Mayor of Salford. jr_website_tobias_theodores_gravestone.jpg 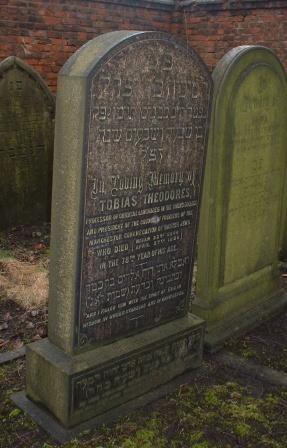 The congregation grew from 110 members at the time of the destruction of Park Place, to a congregation too large for the new building. Additional classrooms were built in 1956 and 1969. By now, the movement of the community out of Manchester and the growth in size, amongst other reasons, led to the founding of a daughter Reform congregation in the South Manchester and Cheshire suburbs, whose synagogue, Menorah, was opened in 1972 and rebuilt anew in 2008-9. This was followed in 1976 by a similar congregation based in North Manchester, Sha’arei Shalom.

Rabbi Goldberg continued to serve as minister until 1974 and was also a co-founder of the Council of Christians and Jews. He was assisted for many years by Rabbi Norman Zalud, now at Liverpool and Sha’arei Shalom. Rabbi Goldberg was followed by Rabbi Toviah Ben Chorin and then from 1977, Rabbi Reuven Silverman has occupied our pulpit. Under his guidance, the congregation continues to flourish.
Key dates for commemoration were: